This post is part of a series, Water Boy.

I’ve been helping folks living in tents and cars here in Oakland with drinking water for a few weeks now. I still haven’t figured it all out. Not even close. But I have learned a few things.

I originally thought water delivery would work on a simple exchange system, like those for propane tanks or beer kegs, but in reverse. I’d start by giving folks twenty-liter jerrycans full of drinking water. When they’d used up all the water in their cans, they’d text me. I’d drive out with full cans and trade their empty cans for my full ones, one-for-one. Then I’d take the now-empty cans back home, clean them up, fill them again, and use them for the next delivery.

I did not anticipate how many people would want to keep the cans.

As it turns out, clean and durable jerrycans are very handy things to have. With your own water container, especially a durable one that can hold right about how much you can comfortably carry, you can fetch water from whatever sources become available, whenever they’re available. You can also store water for several days at a time, rather than worrying about water every day. And you can move and share water within your home, camp, or broader community. The only downside is it’s a pain in the butt to pour the water out. You have to lift them up and tip them sideways. Full cans weigh fifty pounds. Nobody’s going to fill a cup from a jerrycan without spilling.

All the same, once folks have cans, they don’t want to part with them. And they’ll go to great lengths to get them in the first place. I’ve seen several 20-liter plastic jerrycans originally used to sell garden and cleaning chemicals used for drinking and cooking water in Oakland homeless camps. And in fact the same kinds of UN-rated, twenty-liter, off-white, high-density polyethylene (HDPE) jerrycans that the UN High Commissioner for Refugees uses get sold in the United States mostly through commercial packaging and scientific supply companies, in bulk. They’re often advertised as being suitable for caustic and other potentially dangerous chemicals. Water kind of goes without saying.

A jerrycan costs about as much as a deli sandwich and chips. I’m happy just to give them away to homeless folks, as I can. But I need jerrycans for my part in this, too.

Buying water off the shelf, even at budget grocery stores, costs about $1 per gallon here. A few people can easily consume fifty gallons in a week, and much more when the weather’s hot, as it has been lately. $50 per camp per week, for easy weeks, adds up fast.

$50 can also buy two to four jerrycans of five to six gallons each. The cost of filling those cans from the garden house at my house is too small to bother calculating. I add a bit of up-front cost by running that water through a filter designed for RVs, which costs about $20 and lasts for thousands of gallons. So it takes just a few trips for a jerrycan-filter combination to start saving money. And they don’t fill the camps they serve with disposable thin-plastic trash.

Trust gets these savings working for us. The folks I want to help have to trust that I will show up on a semi-regular basis with full cans of drinking water. Mostly, that’s meant me scheduling a delivery a couple days in advance, not waiting for people to text me that they need water. They always need water.

Two tools have really helped us build relationships that make the savings work.

Jobsite water coolers, the kind you see strapped to the backs of construction contractors’ pickup trucks and standing on the sidelines of team sporting events, hold five gallons, the same or less than the jerrycans: 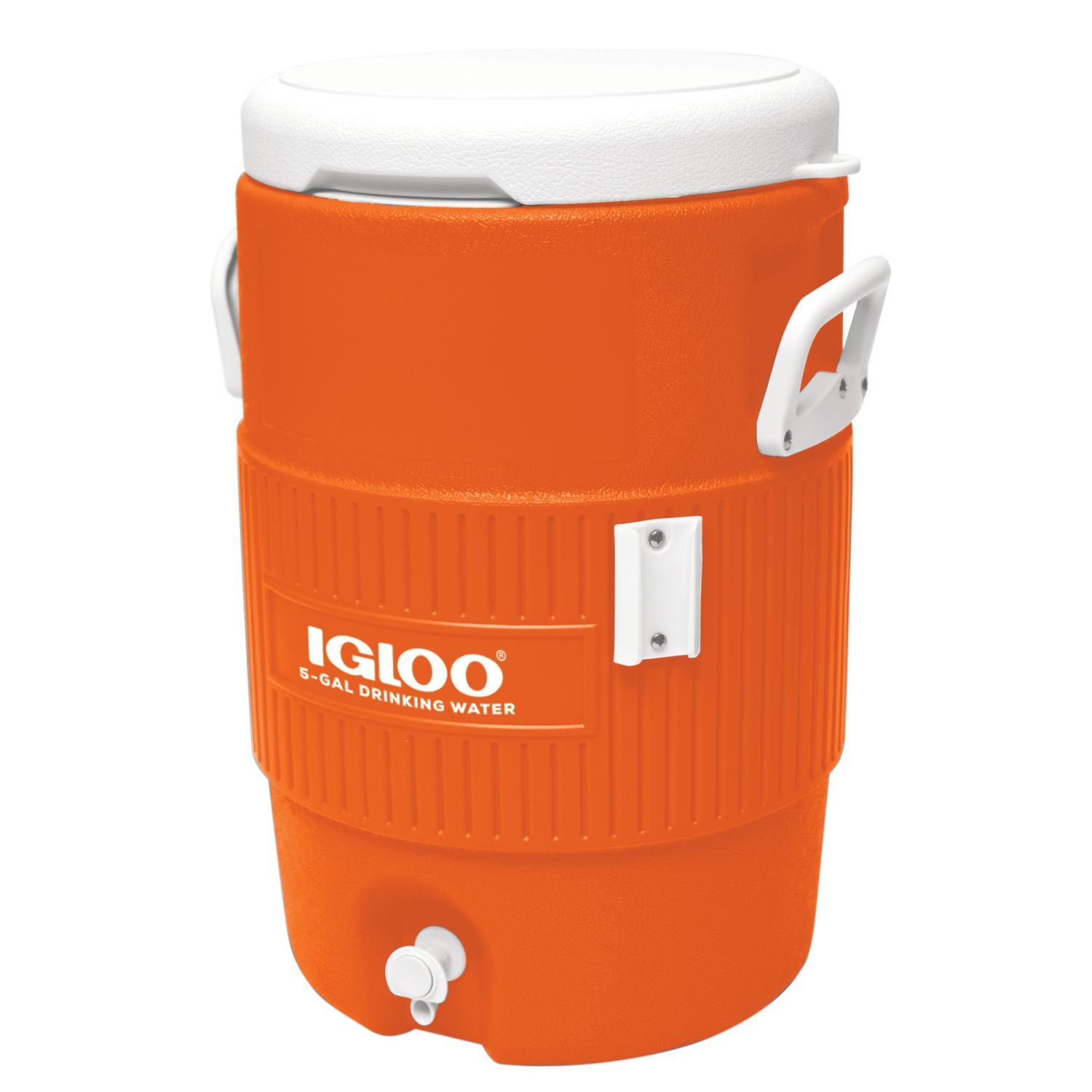 While these coolers are way easier than plastic jerrycans to get locally, from Home Depot and other big-box stores, they’re also more expensive. Jerrycans run $15-25 delivered. Five-gallon coolers run $25-30, plus tax. Coolers are also less portable than jerrycans. They have handles, but they’re awkward for one person to carry very far.

On the other hand, coolers are way better for storing and consuming drinking water. They come with built in, hand-operated spouts. They load from the top, with big, round lids that screw on. They’re double insulated. They’re much, much easier to clean. I haven’t actually seen a jerrycan busted yet. But I know from experience that coolers can take a ton of abuse.

Basically, coolers want to sit still, hold water, and serve people. Jerrycans want to move water around. So for most folks, it’s worked out really well to pair a jerrycan on loan with a water cooler to call their own. To top them up, I fill two jerrycans at home, take them to the camp, empty one into their cooler, and exchange the other for their empty jerrycan. When their cooler runs low, they can refill it from their new can. If their cooler runs low again, they have an empty can to go get water wherever they can.

The second key tool has been other storage containers for water on site. Folks have scavenged and improvised these. What they come up with isn’t often easy to seal shut or to move. Best case, they scrounge up a couple of those round, blue-colored, five- and ten-gallon water jugs that commercial delivery services put on top of refrigerated water coolers in office buildings. As water movers, they’re problematic. As water dispensers, they’re terrible. But as water storage, they’re fine.

Having extra storage space on-site makes it easy for me to bring extra water in jerrycans on delivery, empty the extra cans into the stationary containers, and keep the now-empty cans for myself, for the next run. As the guy moving the water, I don’t lose any mobility. As the folks living at the camp, they don’t lose any storage or convenience. Only the water moves between us.

As an example, say I load six twenty-liter jerrycans into a car for a run. Of those:

I start off with six cans, and I come back with six cans. Two need cleaning. But I can take six full cans out on my very next delivery. With a little time to check and clean the cans I got back, I can do another run on the same day.

The six-can run moves between thirty and thirty-six gallons. A ten-can run, which is totally doable in a Toyota Prius, is fifty to sixty gallons. The cost of water remains too small to count.

I can rent a Prius for an hour, on-demand, for $15, roughly the cost of a single jerrycan. Transportation and cleaning supplies become the only meaningful ongoing costs.

The real goal here is to not have schmucks like me driving water around. These people need access to clean drinking water at or near their camps.

A bit of research shows that many refugee camps operate on regular water-truck deliveries. Tankers will fill up at a local distribution point, drive to a camp, and either park or drop their tanks, with spigots locals can open to fill their cans, as if from a well.

Of course, that feels like a far and distant second-best for people living in Oakland, California, quite literally walking over buried water lines everyday. More about that as I learn it.

Your thoughts and feedback are always welcome by e-mail.

back to top — edit on GitHub — revision history